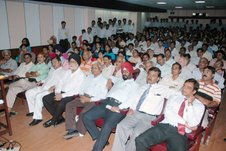 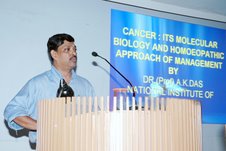 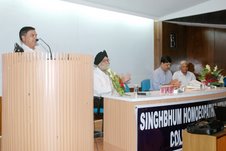 Dr A K Das described all aspects of Cancer, its origin, etiology, spread, management, miasmatic consideration, role of homoeopathy in treating it in detail with power point slides.

The seminar was attended by more than 200 students and about 100 physicians in and around Jamshedpur. A quiz out of the seminar was organinsed on the spot and prizes were given to the winning students.

The programme was compeered by the Principal , Dr Kulwant Singh.

A homeopathic treatment for cancer is under trial at a leading medical centre. Those behind the project are confident that it would pass muster in the next six months.

"The trials on mice to establish the effectiveness of homeopathic medicine have already begun in the United States and by August this year we should be able to establish its efficacy," Dr Susanta K Banerjee, a professor of haematology and oncology told reporters at Kolkata.

Prof Banerjee, who is the director of Cancer Research Unit at the Kansas University Medical Center, said that the trials were being done with the involvement of the National Cancer Institute of the US.

He said that the homeopathy medicines on trial now were the same as those used by leading homeopathic doctor Prasanta Banerjee in Kolkata for many years for the treatment of cancer.

"The success of the trials in the US will only ensure its acceptance as an alternative medicine for treatment of cancer under the modern system of medication," he said.

Dr Prasanta Banerjee, widely recognised for homeopathic treatment of cancer, said that in more than 40 years of practice he had repeatedly seen the efficacy of homeopathy for treating cancer, including brain tumour.

He said that during his years of practice, which has now grown to almost 1000 patients daily, he had standardised the medicine for treatment of cancer.

Prof Susanta Banerjee, who had done his doctorate in genetics from Calcutta University before moving to the US to join the University of Kansas, said that he started taking interest in the treatment of cancer by Dr Prasanta Banerjee as he had cured a record 30 to 40 per cent cases.

He said, "Authorities in the US are quite concerned about the growth of cancer as it has become the third biggest killer. They are even looking at alternative medicines for cure, which everybody knows are available in China or India," he said.

Soraav (Uttar Pradesh), Sept 25 (ANI): Homeopathic medicines, which were so far being used for curing human diseases, are now being used by farmers in Uttar Pradesh as a substitute for chemical pesticides.

Homeopathic medicines cost much less then chemical based medicines, and according to farmers, it also gives better results.

Swami Parmanand's homeopathic medicines for crops have become popular among the farmers living around Soraav division of Allahabad District.

"Earlier, we used to utilize pesticides and manure worth around 1000 rupees on about one acre land. But now, we use only homeopathic medicines worth rupees 200 or 250," said Jeet Lal, a farmer.

Swami Parmanand, a Bachelor of Science, says he has learnt the formula of making the homeopathic medicines from hermits living in the Himalayas.

"These homeopathic medicines should be used in the way you put urea and other sprays on the crops. They give good results, and do not have any harmful effect on the crops. It also improves the taste of the vegetables," said Parmanand.

Introduced in 2004, the popularity of these medicines has even made scholars from the state-run Agriculture University to do a research on it.

"The research on this medicine is going on four universities of the state. A test was completed last year on potato and wheat, and the results were satisfying. It has good effect on environment and mud," said B.B. Rai, Director of the Allahabad Agricultural Institute.

The state-run Agriculture University is conducting some more research on the medicine to find its effects on other crops. (ANI)

A father-son homoeopath duo from Kolkata impressed Western scientists with their paper on homoeopathic medicines for health problems during lunar missions by the US.

Prasanta and Pratip Banerji were the only medical practitioners from India invited to present their paper at a symposium on lunar settlements organised by Rutgers University, New Jersey, earlier this week.

Their paper was on "Possible Use of Ultra-diluted Medicines for Health Problems during Lunar Missions".

The other speakers at the seminar were Harrison H. Schmitt, a lunar model pilot on Apollo 17, and astronomer David H. Levy.

The Rutgers Symposium on Lunar Settlements was organised as a preparatory effort for provision of life support systems for the proposed Malapert Base (on the moon). The base is expected to become habitable by 2025 under the lunar colonisation programme of the US space agency NASA.

The paper presented by Prasanta and Pratip Banerji was based on the fact that the moon has no magnetic field and hence problems of dispersion, solubility, absorption, availability at tissue level, metabolism and excretion of drugs, including recycling problems and disposal, do exist.

Ultra-diluted medicines have the capability to act through nerve terminals when placed on our tongue to execute beneficial roles in our body.

"Ultra-diluted medicines are also non-toxic, with extended shelf-life, non-addictive, with negligible weight and volume, low-cost, and easily administrable," he added.

Malapert Base on the moon is being designed to house a revolving population of 300 people or more and to last for a minimum of 250 years. One third of the population will expectedly be made up of lunar tourists and long-term Malapert residents.

A real jewel and satisfaction behind a successful homoeopathic practice lies in providing a holistic (wholistic) healing to a diseased patient.  A key for such practice lies in having a sound understanding upon What constitutes Whole in Health and in Disease, thus touching the root or core as we as homoeopaths always yearn for.

This book is all about understanding the “whole” human being step-by-step and reaching the deepest core. It provides guidelines in understanding what constitutes the Whole in Health thus making it easy to follow its deviated form in Disease. The scientific correlation of the idea with the various universal laws and the latest developments in physics described in this book is the real charm of the journey as it not only makes the entire ride a very interesting one for its reader but also gives a firm footage to the narrated ideas.

Benefits of such deeper understanding of human core in practice is seen as a long term deeper healing produced in a patient besides subjective relief at their mind, body levels; these are well demonstrated as documented cases at the end of the book.