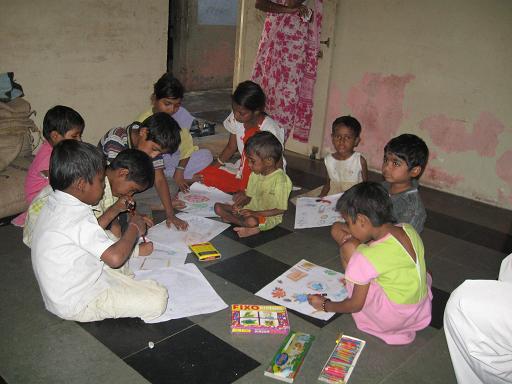 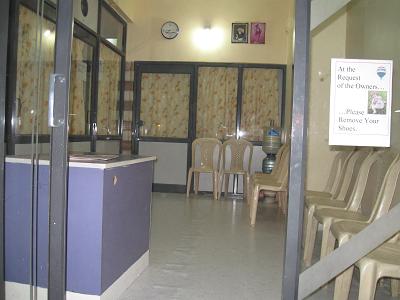 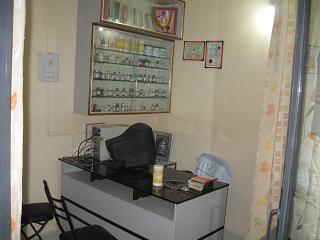 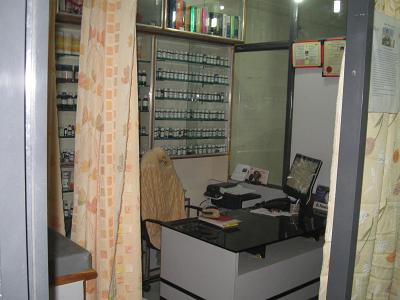 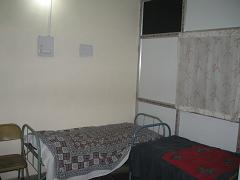 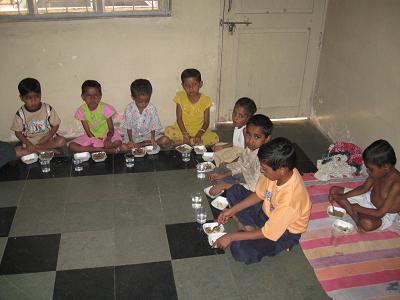 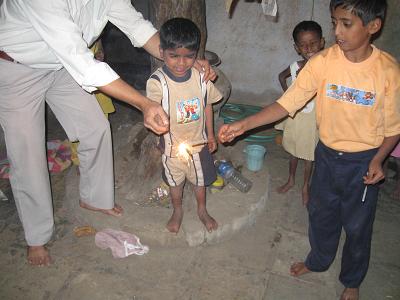 On 27th October Homoeopathic Academy of Research & Charities has organized a program at 'Jeevanrekha Balgrih' run by Nari Vikas Mandal, Parbhani for AIDS affected children. Team of HARC went there are distributed one month 'Sprout Material to Care taker of society which will be used as Nutritious breakfast daily morning. Also served Nutritious foods to children. In this Program in the presidential address by Adv M. K. Ubale said that such type of program are very necessary in this society, there is need to gather all active social worker & to work for the health benefit of these children. Art of Living Teacher Mr. Ambekar says that we are planning to conduct educational program which will help to build up mental & physical health of these children, to gain confidence in these children so they should not think they are different from society. We will plan to mix up them with our society. Mr. Prashant Yeldarkar, Dr. Nikhil Kendrekar, Mr. Ambadas Akulwad had organized 'Drawing competition' for these children. Students had actively involved in this competition  and enjoyed it. HARC planned to start Education for these children on weekly basis so that they can read & write. In the evening Dr. Pawan S. Chandak, Dr. Nikhil Kendrekar & Mr. Ambadas Akulwad celebrated Diwali with these children.

Special Training for US homeopaths in MAY and JUNE 2009 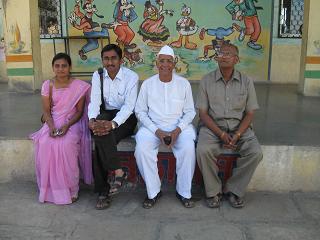 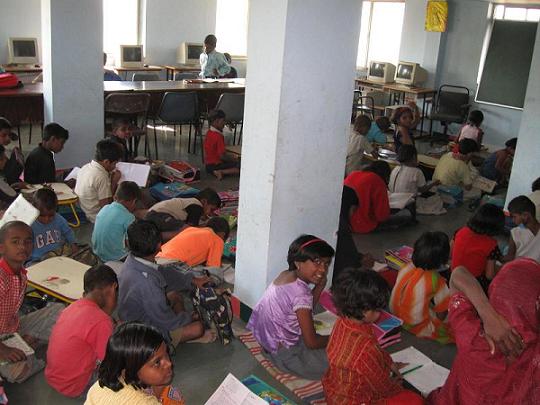 Every year ‘Turat Peer Dargah Festival’ celebrated at Parbhani where more than 15 lakh people gather & celebrate it where lots of exhibition, entertainment programs arranged. So on this occasion to bring awareness about Homoeopathy in AIDS & about our TUBAID project we arranged Exhibition stall at Parbhani in which educational posters, charts, Homoeopathy & AIDS awareness charts presented. Many people came for enquiry of it. 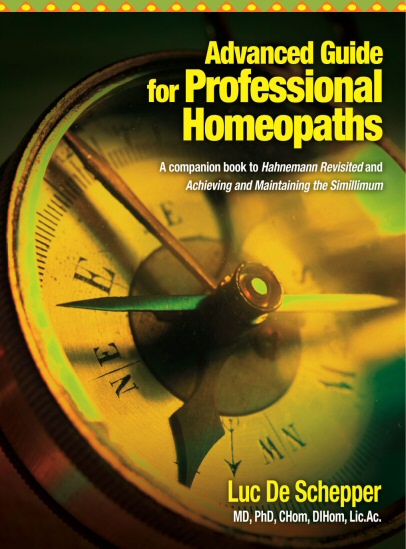 This book is intended to bridge Dr Luc's two books: Achieving and Maintaining the Simillimum and the book due out in 2009--Jung: Delusions, Dreams and Homeopathy, which has been the core material of his latest seminars. The latest findings about potencies, miasms and observations of Hering are fine tuned for clinicians. Furthermore, eleven intra-uterine questions and eleven questions for the homeopath to see if the clinician has the right remedy are explained in detail with clinical examples. In addition, the core delusion is defined and ways of finding it in the clinic. Jung's introduction of extrovert and introvert types, as well as the functions of consciousness, give the homeopath a solid introduction to use these characteristics to know the constitution and temperament of the patient. This is an invaluable guide for any professional in practice.

The National Academy of Homoeopathy, India which is now in the 31st year of its existence, is committed to widening its activities from its conventional role of conducting the biannual Postgraduate residential homoeopathic schools to biannual workshops in the memory of Late Dr. J.N.Kanjilal of Kolkatta.

The Central Secretariat (Nagpur) decided that the theme for Academy’s ninth workshop would be Miasmas and the venue was the prestigious Dr. Babasaheb Ambedkar Sanskrutik Bhavan, Pune. It was also the moment of installation of “Pune Core Group” of the Academy under the leadership of Dr. Abhijeet Joshi.

Education is the process of shaping the human mind, be it individually or collectively. Workshops provide an infrastructure and the 9th Late Dr. J.N.Kanjilal Memorial Workshop “MIASMA -09” was one such platform. It was a platform not only to create awareness but also to share information right from the history, meaning of the word, sources, vehicles to the clinical significance and cases managed by the knowledge of Miasms.

Indeed this was a long awaited topic since right from Hahnemann’s times; Miasm has been an ill-understood subject. The scientific program laid out was comprehensive covering the entire panorama of Miasms. Sessions were planned in a manner conducive to a good interaction between the faculty and the audience. The speakers represented an outstanding team of recognized homoeopathic experts in the field of miasmatology.

At the outset, the traditional samai was lit by all the Guests and rich tributes were paid to Late Dr. J.N.Kanjilal by Dr. Aadil Chimthanawala. Inaugurating the workshop, veteran homoeopath of Pune Dr. M. P Arya commented that the concept of Chronic Diseases has divided the homoeopaths into two groups – the non believers and believers. The former only apply the concepts of Similia, minimum and potentization in their practice whilst the latter adhere to all these and that of Miasms in principle & practice. Both senior homoeopaths, Dr. S. Katekari & Dr. S. Phansalkar (Director I.C.R: Pune) agreed with Dr. Arya on this point. They were very liberal in their praises for the speakers –Drs. Kasim & Aadil Chimthanawala. Dr. Katekari went on to say that it was the first time that deans of all homoeopathic institutes of Pune had conglomerated on a single dias and the credit goes to the Academy. Dr. P Sethiya (Principal D.S.H.M.C) & Dr. A.Jadhav (Principal Bharathi Vidhyapeeth H.M.C) also shared their views.

The first session was by Dr. Kasim. In his immaculate style he provided an insight of evolution of Dr. Hahnemann’s practice from Domestic (1790 - 1810) to practice only the laws of Similia, dynamization & potentization (1811-1827) and finally practice on the concept of Chronic Diseases (1828- till death). Vivid details were discussed regarding the necessity of the concept, genesis, retaliation that Hahnemann met upon its introduction, etc.

The Pune core group of NAHI comprising of Drs. Abhijeet Joshi, Yashodhar Bhalerao, Amit Tribhovan, Vyankatesh Kulkarni, Rupali Deshmukh, Shailesh & Sarika Doshi and others, accepted the challenge of hosting for the first time a workshop of national level in the city of Pune. They left no stone unturned in making the arrangements for its success so that the homoeopathic fraternity would enjoy the academic feast and their stay at Pune would be left with pleasant memories that will be cherished for a long time. 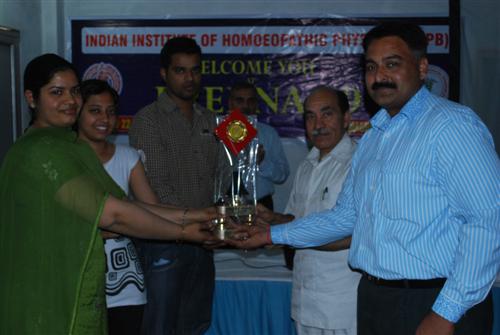 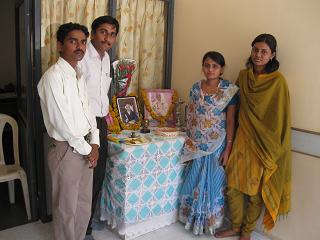 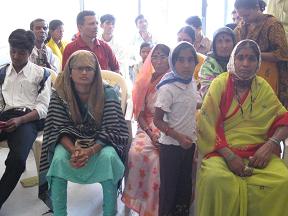